The Lonely Nobility of Brendan O'Neill 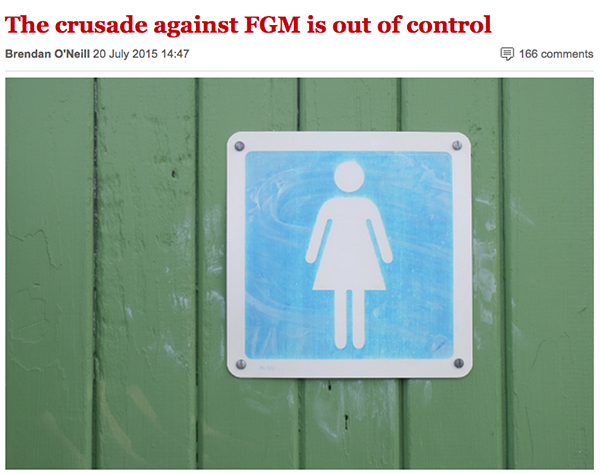 In an angry article for the Spectator, Brendan O’Neill inveighs against provisions in the Serious Crime Act (2015), which authorise the confiscation of passports, and mandatory vaginal examinations of young girls thought to be at risk of Female Genital Mutilation (FGM).

O’Neill’s writing is often described as a merely contrarian. But, while his irritation with consensus and received wisdom is dependably palpable, his objections are more-often-than-not libertarian in impulse. And since libertarianism is primarily concerned with the defence of personal autonomy, he tends to be reflexively hostile to any intervention by the state in the lives of its citizens.

But the state does not present the only threat to liberty. Young girls undergoing FGM at the hands of their own families are forcibly restrained and may be subjected to a combination of one or more of the following: clitoridectomy, labial excision, infibulation, and – in the most extreme variant of the practice – cauterisation of the vagina’s interior. The harrowing procedure is usually suffered without anaesthetic.

20,000 British girls are estimated to be at risk of FGM of one kind or another every year. This is also, I submit, an intolerable assault on personal autonomy, and one which state-sponsored FGM prevention is specifically intended to eradicate.

The monitoring of young girls most vulnerable to this kind of abuse, the restriction of their freedom to travel, invasive medical exams and so forth, indeed constitute state infringement of personal liberty. But a thoughtful and intellectually honest libertarian analysis must acknowledge the corresponding costs of inaction. If it does not, it risks sacrificing the defence of personal autonomy to a perverse opposition to state intervention, irrespective of intention and consequence.

O’Neill expresses his alarm that excessively broad guidelines alerting school and law enforcement authorities to indications of abuse may well result in false positives. This is a legitimate problem, but it is one without an obvious solution.

In the UK, FGM is a covert cultural practice conducted within closed communities behind closed doors. Until comparatively recently, the West preferred to turn a blind eye. However, awareness-raising campaigns (often led by victims of FGM) and gathering public anxiety about cultural relativism have resulted in widespread revulsion and official condemnation, which only encourages greater secrecy among those convinced of FGM’s necessity.

How many false positives is O’Neill prepared to tolerate to prevent the mutilation of a single child’s genitals? Ten? Three? Zero? He does not say. Instead, he condemns state prevention efforts that profile young British girls of African heritage while neglecting to acknowledge the perfectly obvious reason for this. “Guess whose vaginas would be interrogated?” O’Neill wonders scornfully of proposals to subject young girls at risk to gynaecological examinations. “Not little Chloe’s – just little Abebi’s.” To which one can simply return the question: guess whose vagina will be mutilated in the absence of action?

O’Neill is at pains to insist that he is no cultural relativist. “I’m happy to say FGM is a backward, barbaric act,” he announces. “Those who say it’s just another cultural practice, and we should respect it, are moral cowards, incapable of making judgements.” Well, good. But his implacable opposition to state intervention on ostensibly libertarian grounds desires the same state paralysis, nonetheless.

Like a self-flattering pacifist who prefaces every anti-intervention argument with a mumbled acknowledgement of the cruelty of the totalitarian regime at issue, O’Neill’s condemnation of FGM feels suspiciously pro-forma. He offers nary a constructive proposal to counter those he denounces, and which might better serve the interests of the young girls in whose defence he professes to write.

Instead he closes on a solipsistic note, with a defiant declaration of conscientious objection to an illusory state-enforced racism. At which point, his article’s true subject swims into focus, and it is neither FGM nor its victims. It is the lonely nobility of Brendan O’Neill.

This article was first published by Left Foot Forward on July 21.
Posted by Unrepentant Jacobin at 16:55