Relativising the Education of Malala 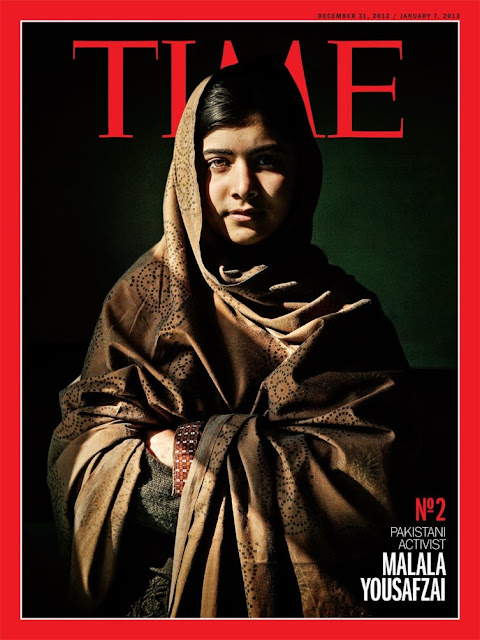 The wise saying, “The pen is mightier than sword” was true. The extremists are afraid of books and pens. The power of education frightens them . . . That is why they are blasting schools every day. Because they were and they are afraid of change, afraid of the equality that we will bring into our society.

Malala Yousafzai at the United Nations

On Friday 12 July, the day of her 16th birthday, Malala Yousafzai gave a speech at the UN about the pressing need to support the education of women and girls in defiance of those who would murder children and destroy schoolhouses. The young activist had lived Pakistan's Swat Valley and campaigned there since the age of 12, until an assassination attempt by Taliban gunmen on 9 October, 2012 almost brought her life to an end.

Six days later, the Taliban issued an unofficial response to her speech in the form of an open letter addressed to Malala. Its author was Adnan Rasheed, who is Head of Ansar Al-Aseer, a taskforce established by the Taliban (TTP) to free jihadi prisoners. But he was keen to point out that he was "writing in a personal capacity [and] this may not be the opinion or policy of Tehreek e Taliban Pakistan or other jihadi faction or group."

This prompted an odd article over at Pakistan Today accusing those who believe Malala was shot for her education advocacy of "an abundance of ignorance and volumes of hypocrisy".

For such strong words of condemnation, the objections are weak. The first is that the Taliban say otherwise:


Taliban commander Adnan Rasheed’s letter to Malala published on the web on Wednesday, which echoed Ehsanullah Ehsan’s open letter dated October 16, 2012 – written a week after the attack on Malala – reconfirms that she was never targeted owing to her stance on education. It was because of her leaning towards the “wrong” side of the ideological fault line, which led to the shooting and in turn the international convulsion.

The only thing Adnan Rasheed's letter to Malala reconfirms is the Taliban's propaganda line on the matter. Adnan Rasheed in fact accuses her of "running a smearing campaign to malign [the Taliban's] efforts to establish Islamic system in swat and your writings were provocative". He then complains:


[Y]ou and the UNO [United Nations Organisation] is pretending that as you were shot due to education, although this is not the reason, be honest, not the education but your propaganda was the issue and what you are doing now, you are using your tongue on the behest of the others and you must know that if the pen is mightier than the sword then tongue is sharper and the injury of sword can be hailed but the injury of the tongue never hails and in the wars tongue is more destructive than any weapon.

I have been unable to find an English translation of Taliban spokesman Ehsanullah Ehsan's 7 page letter of the 16 October, but in a statement released the day after her shooting, Ehsan said much the same:


Its a clear command of shariah that any female, that by any means play role in war against mujahideen, should be killed. Malala Yousafzai was playing a vital role in bucking up the emotions of Murtad army and Government of Pakistan, and was inviting muslims to hate mujahideen . . . Malala is targeted because of her pioneer role in preaching secularism and so called enlightened moderation.

She was, in short, perceived as a traitor to their theocratic tyranny. Given the disastrous consequences - from the Taliban's point of view - of their botched assassination attempt, it's unsurprising that they are trying to spin this as a regrettable but necessary act of war. But since they are fighting and killing for a morally bankrupt totalitarian ideology, this constitutes no justification at all. It takes some front to argue from victimhood when you have tried to assassinate an unarmed 15 year old girl as part of a campaign to silence and terrify.

The distinction between Malala's campaign for education and her alleged treachery is, in any case, a meaningless one. Malala presents a threat to religious fanatics because she represents the two things they fear most - the potency of knowledge and its capacity to empower women. It was her campaigning for the right to be educated while the Taliban destroyed schools in Swat that made her a dissident and therefore an enemy, a traitor and a target.

In what amounts to a semantic argument, Adnan Rasheed pretends that he has no quarrel with Malala over "education" per se, because he too has learned from teachers and seeks to teach others:

Adnan Rasheed affirms further into his letter that said prophetic curriculum does not require a lengthy reading list:

In his Pakistan Today article, Kunwar Khuldune Shahid appears peculiarly impressed by this self-serving relativism, and reckons it provides food for thought:


Which teacher, which pen and which book should change the world? . . . Many an imperialist has posed as a teacher, using swords to pen down fallacious books brimming with the legacy of their veneration.

Shahid implies that the freedom to read as one wishes on the one hand, and the suppression of all books but one on the other, are simply different forms of "education", thus invalidating the topic as a meaningful bone of contention between Malala and the Taliban. What we must focus on instead, he argues, is the identity of the educator.

But the equivalence Shahid draws between the education Malala seeks and the 'education' offered by the TTP relies upon a confusion - certainly deliberate on the part of the Taliban - as to what is at issue when the term 'education' is used in this discussion. It is not just the identity of the teacher that is distinct here but the very process itself. The freedom to think as you are told to think is no freedom at all. Malala poses a threat because she wants the freedom to think critically and to freely inquire; to actively learn as opposed to being passively instructed; to earn qualifications that can empower her with a career and financial independence. The denial of this right is part of a systematic campaign to disempower women and girls and to keep the broader populace chained in a state of pious ignorance.

What the Taliban - or any other totalitarian authority for that matter - desire is not education but its antithesis: indoctrination and censorship. The former involves the emancipation of the mind and the empowerment of the individual; the latter, their suffocation. Which is why indoctrination has to be imposed at gunpoint and education does not. This is what Malala means when she speaks about education, and the Taliban knows it. Their counter-claim that they are also educators (and of a superior kind, no less) is simply sophistry.

What's frustrating about Shahid's Pakistan Today article is that his conclusions are basically spot on. The "ideological faultline" he identifies between oppression and freedom as the real epicentre of what he calls the 'Malalaquake' is self-evident. But Malala is on the correct side of the fault and it is her education activisim that put her there, so I'm slightly lost as to why he finds it necessary to chide her for her naivety and simple-mindedness:


Probably the most famous line from Malala’s speech at the UN was, “One child, one teacher, one pen and one book can change the world.” And this is the bizarre smokescreen that the poor child doesn’t even know that she’s fuelling. The Taliban do not have an issue with teachers, pens or books, their concern is: what is being taught, what is being written and what is being read.

Well, of course it is. But there is no smokescreen (an unhelpful term, by the way, which will only encourage the conspiratorially-minded). Shahid is creating nuance and finding equivalence where none in fact exists.

In Pakistan, the overall adult literacy rate is ~55%. The fight against obscurantist oppression is contingent upon the education of its foes, because the universal right to free inquiry and the pursuit of knowledge are the sine qua non of all liberties. Malala Yousafzai was shot because she understood this and because she is trying to make others understand it too. As she told the New York Times during an interview in 2010 for a short documentary about her life:


They cannot stop me. I will get my education if it is in home, school or any place. This is our request to the whole world: Save our schools; save our world; save our Pakistan. Save our Swat.

It really is as simple as her metaphor of bullets vs books and pens suggests.

Malala's speech to the UN can be watched here. The 32 minute documentary made by the New York Times in 2010 about Malala's life in Swat Valley can be seen here.
Posted by Unrepentant Jacobin at 09:05